In anticipation of our upcoming commemoration of the the 40th anniversary of Day’s death on November 29th 2020, we remember the eulogy given by Father Geoffrey B. Gneuhs, O.P. at the funeral of Dorothy Day, Nativity Church, New York City, December 2, 1980. 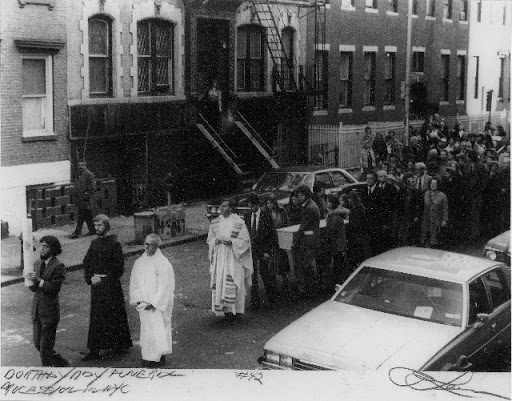 In her book The Long Loneliness, Dorothy wrote, “All my life I have been haunted by God.” And where did this haunting God lead her? To a life of simplicity and poverty with the poor, to solidarity with the outcasts—today in this city of New York there are more and more people homeless as mental hospitals close and social services are cut back, while at the same time this country spends $170 billion a year for armaments.

This haunting God led Dorothy to jail because she spoke and acted for the rights of women and men, of laborers and workers; she was led to jail because she stood with the farm workers, and to prison because she would not tolerate the militarist posture of this country. She was led ultimately to community, to love. This being haunted by God became for her a stupendous and extraordinary pilgrimage, a pilgrimage of faith. For sure, the Sermon on the Mount sums up the entire life and spirit of Jesus, and it is an invitation which Dorothy with consummate conviction accepted. She realized that love is an exchange of gifts: the gift of faith, and she in turn offered the gift of her life lived in faith, given for us and thousands of others. The Sermon on the Mount, along with the 25th chapter of St. Matthew, the cornerstone of the Catholic Worker movement, is not some general guide or optional outline. It is the very expression of the flesh and blood of Jesus—the Incarnation of Truth.

In our country, those who have so much, too much, are apt to declare “Well, the poor you’ll always have with you”—not realizing or hearing Jesus speak the Truth in the Sermon, not hearing the Truth call out. That is precisely the point. Christ the poor one is always with us!

Dorothy, with dear Peter Maurin, of whom she wrote, “He was my master and I was his disciple, he gave me a way of life,” realized this Truth so well. She said, “What a simplification of life it would be if we saw Christ everywhere we go.” Did you give me clothes? Did you give me food? Did you give me shelter in the empty room in your home, of your rectory or priory?

To love, for her, was not a duty but a privilege. And should it not be for all of us? It begs the question: Do we want to meet Christ? Do we really believe? We do not have to go far to see Christ, to invite Christ, and to be invited by Christ. The invitation is offered for loaves and fishes, more often at our houses, soup and bread and tea. To those of us who doubt, to us Christians who waver, Dorothy showed by her love that, yes, the Gospel is possible. The Gospel is so possible it is now and cannot wait for the future. The moment is ours. Dorothy seized the moment given her. The Truth called her forth and she accepted the invitation—solidarity with those without the arrogance and dominance of wealth, power, and prestige. She lived the Truth with all its starkness and abruptness, with all its freedom and its love.

She wrote, “We cannot love God unless we love each other and to love we must know each other—and we will know Him in the breaking of the bread—and then we are not alone anymore. Heaven is a banquet and life is a banquet too, even with a crust, where there is companionship.” Love is not meant to be a half measure, nor is it meant to be easy. Dorothy on her pilgrimage knew that violence and war are not the way of Christ, that love is the only measure. Thus Truth again called her forth and she accepted the invitation to speak out against war and the crucifixion of humanity by nuclear armaments.

Wouldn’t it be a tragedy for us to equivocate or to dilute the spirit of her life? She was utterly convinced of the rightness of pacifism and of nonviolent resistance to statism. And never, even at age 83, did she waver in the clarity of her vision of Truth and in her conviction. Today the romance of war and power and individualism ignores the capacity of the human imagination imaged in God to see and to live the Gospel of gentle personalism and unconditional love. And Dorothy loved life, believed in life, enjoyed life. It was the very life of a child that welled up in her the invitation to the pilgrimage. In St. John’s Gospel, Jesus says, “I have come to bring life, to bring life more abundantly.”

Remember when Jesus was on trial for his actions of Truth? He said to Pilate, “Mine is not a kingdom of this world. If my kingdom were of this world, my men would have fought…. I came into the world for this: to bear witness to the truth and all who are on the side of truth listen to my voice.”

And what was Pilate’s reply? “Truth,” he said, “what is truth?” In a truthless world, some have struggled to listen to His voice and to continue to speak Truth—the Truth of Christ. And one was Dorothy: in her commitment to justice, to freedom and to peace, her resistance to the kingdoms of this world, and her unflinching commitment to the belief that love will redeem the world, Dorothy had a dream of this Truth, the dream became a vision, and the vision became a light for the world. The Truth guided her pilgrimage and she admitted, “We confess to being fools and wish that we were more so.” Oh, thank God for such foolishness!

And so Dorothy, the pilgrimage is over. You’re home now. The Truth invites you to the eternal banquet.