Only two words, at her request, grace Dorothy Day’s grave: “Deo Gratias.” “Thanks be to God.”

The Dorothy Day Guild acknowledges with great gratitude all who made the celebration of her legacy — occasioned by the 40th anniversary of her death — as alive as her memory.

So many to thank! Starting with our distinguished panelists — David Brooks, Anne Snyder, and Paul Elie – for their so generous sharing of heart, mind, and spirit.

See event announcement below or watch the recorded event on Youtube.

And very special thanks to:  convener Robert Ellsberg for his illuminating insights; interviewer Colleen Dulle for her welcoming curiosity; Nick Sawicki and America Media for our inspired partnership; and the Guild’s Fundraising and Communications Subcommittees for their joint efforts in shepherding the event with the dogged, creative help of members Alex Avitabile, Anthony Santella, and Carolyn Zablotny.

Warmest thanks to all our individual supporters, spreading the word to family, friends, and colleagues.

And an abundance of thanks to all who registered and listened!  “Where two or three are gathered….” And you were nearly twenty-five hundred!

(Please too, we welcome all your comments, reflections, and ideas for future events. Contact: Alex Avitabile at ddg.archny.org)

Finally, we extend our deep appreciation to the following major supporters (including publications, peace and justice organizations, educational institutions, Catholic Worker houses of hospitality, and parish churches) that honored the Cause for Dorothy Day’s sainthood by publicizing the event to their constituents:

“If I have achieved anything in my life, it is because
I have not been embarrassed to talk about God.” 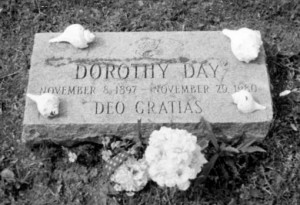 PLEASE JOIN
in a VIRTUAL CONVERSATION
from 6 – 7:30 pm ET

Together we will reflect on how,
in a time of pandemic and strife,
40 years after her death,
Dorothy Day and the Catholic Worker
inspire holiness and community.

This special event is free, but your registration is necessary. Thank you!

Event is past but you may view the recording on YouTube.

As you think about her legacy, you may want to check out Geoffrey Gneuhs’ moving eulogy for Dorothy, delivered 40 years ago, which can be found here.

David Brooks, one of the nation’s leading writers and commentators, appears regularly on “The PBS Newshour,” NPR’s “All Things Considered,” and NBC’s “Meet the Press,” and is an Op-Ed columnist for The New York Times. His most recent books, the bestsellers The Road to Character and The Second Mountain, are elegant explorations of the morally engaged life.

Anne Snyder is a widely published writer who serves as Editor-in-Chief of Comment magazine, a journal of public theology for the common good. She also oversees its partner project, Breaking Ground, dedicated to galvanizing the transformative power of the Christian imagination in this year of crisis. Formerly she directed the Philanthropy Roundtable’s Character Initiative, working to strengthen and re- envision the most effective character-forming institutions for our day.

Paul Elie is the author of an acclaimed group portrait of Dorothy Day, Walker Percy, Flannery O’Connor, and Thomas Merton, The Life You Save May Be Your Own: An American Pilgrimage. He is a Senior Fellow with Georgetown University’s Berkley Center for Religion, Peace, and World Affairs, where his work revolves around the expression of religious ideas in literature, the arts, and culture, and a regular contributor to The New Yorker.

Convener: Robert Ellsberg, the Editor-in-Chief and publisher of Orbis Books, joined the Catholic Worker on leave from studies at Harvard, living and working with Dorothy Day the last five years of her life. The editor of her diaries, selected letters, and writings, he has written extensively about the lives of the saints and other models of holiness, past and present.

Interviewer: Colleen Dulle, the host and producer of the weekly news podcast, “Inside the Vatican,” is the Assistant Producer of Audio and Video at America Media. She has reported national and international news for the Catholic News Service and The Associated Press, and is the recipient of the prestigious 2019 Catholic Press Association Multimedia Journalist of the Year award.

(Robert and Colleen serve as Advisory Committee members of The Dorothy Day Guild — the body officially charged by the Archdiocese of New York, where Day lived and worked, to forward her Cause for canonization. The Guild gratefully acknowledges America Media whose partnership made this event possible. America Media is the leading provider of editorial content for thinking Catholics and those who want to know what Catholics are thinking.

The Guild also extends a special thank you to the Sheen Center for Thought and Culture for its support and guidance.)

6 Responses to A Saint for Our Time