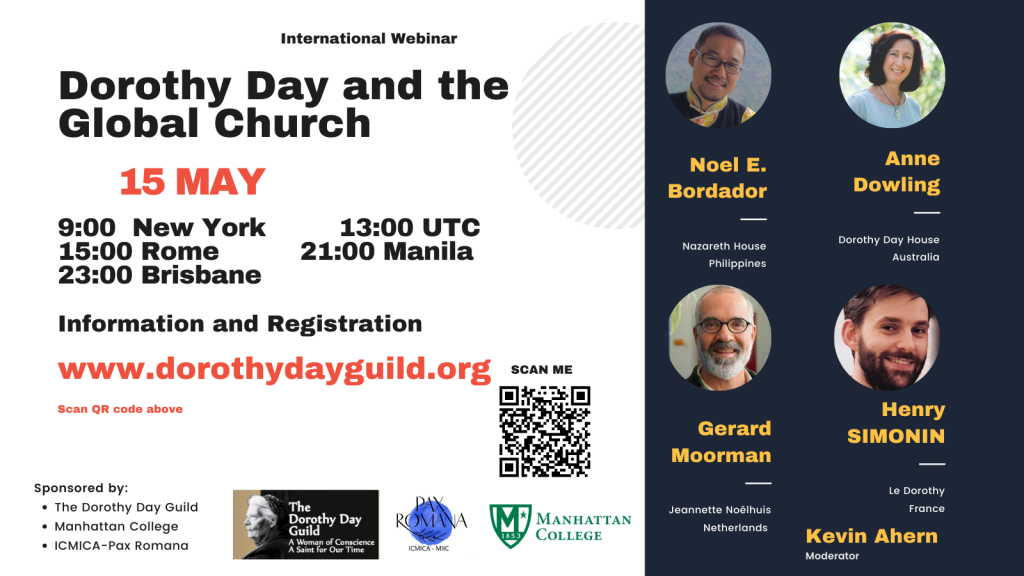 Scan the QR code above or click here to register for what will be a fascinating upcoming discussion about Day’s global reach.

Our friends at the Jesuit Volunteer Corps are holding A Zoom Celebration and Discussion on the Person, Politics, and Passion of Dorothy Day. Details below, follow the link for more information and registration. https://ivcusa.org/dorothy-day/

A Zoom Celebration and Discussion on the Person, Politics, and Passion of Dorothy Day
Date: Wednesday May 19, 2021
Time: 7:00 – 8:30pm Eastern Daylight Time 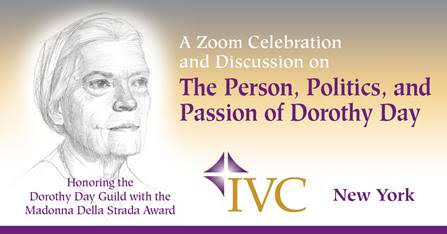 Where no donation is too small — Loaves and Fishes Campaign

“Giving primacy to God means having the courage to say no to evil, violence, oppression; to live a life of service to others….” – Pope Francis

Dorothy Day has been called many things:  an activist, a journalist, a radical, a bohemian, a mother, a convert, a mystic, a prophet, a faithful daughter of the Church.  After her death in 1980, historian David O’Brien famously called her “the most important, interesting, and influential figure in the history of American Catholicism.”

And then there are the many who call her, quite simply, a saint. Years ago, Archdiocese of New York’s Cardinal John O’Connor wrote in Catholic New York, the archdiocesan newspaper, “Shortly after I announced the study of Cardinal Cooke’s life [as a candidate for sainthood], several people wrote to ask me:  ‘Why not Dorothy Day?’… It’s a good question.  Indeed, it’s an excellent question.” The Cardinal pondered the question aloud in a homily given at Saint Patrick’s Cathedral on November 9, 1997, a day after the hundredth anniversary of Dorothy Day’s birth.  He recognized that some might object to his taking up the cause of canonization for Dorothy Day because “she was a protester against some things that people confuse with Americanism itself.”  Others, he said, might argue that she was already widely recognized as a saint and therefore formal canonization was not needed.  “Perhaps,” Cardinal O’Connor acknowledged, but went on to ask “Why does the Church canonize saints?  In part,”  he said, “so that their person, their works and their lives will become that much better known, and that they will encourage others to follow in their footsteps — and so the Church may say, ‘This is sanctity, this is the road to eternal life.’ ”

More recently, in November 2012, the question of Day’s being an appropriate candidate for canonization was raised by the present Archbishop of New York, Cardinal Timothy Dolan, at the annual meeting of the United States Catholic Bishops.  In a voice vote, the bishops asked the Holy See to continue the canonization process that had been initiated by Cardinal O’Connor in 2000.  Unanimously, they upheld sainthood for Day, who related the Sermon on the Mount to everything she undertook and did.  Few of the faithful in the twentieth century were more committed than Dorothy Day to the Church’s teachings on economic and social justice and on the evils of the arms race and the pursuit of war.  She was a daily communicant, and rose early to read the Bible and pray the rosary.

In his first encyclical, Lumen Fidei, Pope Francis eloquently affirmed the core teachings that animated Day’s life:  “The light of faith is concretely placed at the service of justice…and peace,” he wrote.  Day embraced the totality of Catholic belief and practice, living a life of poverty.  When she sometimes challenged the Church, it was usually because she felt it had departed from Gospel principles, particularly when it came to the forgiveness of one’s enemies.  Labels of left or right, temptingly applied by liberals and conservatives alike, fail to explain or contain Dorothy Day.  Perhaps, ultimately, that’s why this woman of conscience is a saint for our time.