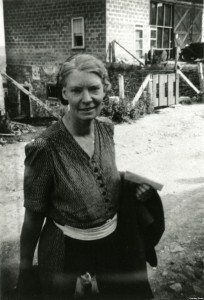 Dorothy Day did not set out to become a saint, although she often quoted a famous statement that “The only tragedy in life is not to be a saint.”

She simply spent a lifetime attuning herself to hear God’s voice. The pilgrimage of her daily life was oriented by Jesus’ teachings as she pursued a call to belong fully to the Body of Christ.

On December 8, 1932, in the midst of the Great Depression, while on assignment as a journalist reporting on a national Hunger March and a gathering of poor farmers, Dorothy Day prayed to discern her vocation as a Catholic. She attended Mass at the Basilica of the National Shrine of the Immaculate Conception in Washington, D.C.:

“There I offered up a special prayer, a prayer which came with tears and with anguish, that some way would open up for me to use what talents I possessed for my fellow workers, for the poor.” ― from The Long Loneliness

On her return to New York City, the answer to her prayer was waiting in the person of an itinerant Frenchman and worker scholar named Peter Maurin. Their meeting led to the founding of the Catholic Worker movement, which to this day continues to open up ways to practice the Church’s social teachings.

We invite Dorothy Day Guild members and friends to join in a novena of gratitude, giving thanks for Dorothy Day’s valiant response to God’s call. Beginning on November 29 (the anniversary of her death), the novena will continue until December 8, when the Dorothy Day Guild of the Archdiocese of New York will mark the conclusion of the local diocesan phase of the Cause.

With a special Mass at New York’s Saint Patrick’s Cathedral (live-streamed at https://saintpatrickscathedral.org/live) at 7:30 pm on December 8, 2021, the Solemnity of the Immaculate Conception, we will celebrate the send-off of the evidence of Dorothy Day’s holiness, amassed by the Guild, to the Congregation for the Causes of Saints in Rome. We rejoice that the Church embraces her witness to God’s love as a model of holiness.

Over the course of the novena, we will reflect on Dorothy’s generous, whole-hearted acceptance of God’s call by each day looking at a particular facet of her discipleship – what biographer Robert Ellsberg referred to as the “distinctive features of her holiness.”

Each one of us, too, has a unique calling; and God loves each of us as a whole person. As we give thanks for Dorothy Day’s life – and for the Church’s recognizing of her holiness – let us ask her to join us on our pilgrimages. Servant of God Dorothy Day, intercede for us; pray that we grow in courage and faith to follow our own path to holiness.

Pray the Novena with us.

One Response to Day’s Birthday and Upcoming Novena