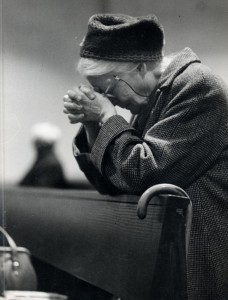 “Every Catholic faced with a great need starts a novena.” –Dorothy Day, The Long Loneliness

Today, we pray in gratitude for Dorothy’s wholehearted response to living out the demands of the Gospel. Although she grew up in a nominally religious family and later espoused a bohemian lifestyle, Dorothy searched for God from an early age. While she joined with leftists to support workers’ struggles, her heart was called to a deeper solidarity, in the Mystical Body of Christ. After first baptizing her daughter, Tamar, she too became a Catholic – joining the Church of the immigrant poor.

During his address to the United States Congress in 2015, Pope Francis said, “I cannot fail to mention the Servant of God Dorothy Day, who founded the Catholic Worker Movement. Her social activism, her passion for justice and for the cause of the oppressed were inspired by the Gospel, her faith, and the example of the saints.”

Dorothy wrote, “The lives of the saints… are too often written as though they were not in this world. We have seldom been given the saints as they really were, as they affected the lives of their times … too little has been stressed the idea that all are called.” She also wrote, “Holiness is not a state of perfection but a faithful striving that lasts a lifetime.” – The Duty of Delight: The Diaries of Dorothy Day

Servant of God Dorothy Day, intercede for us; pray that we grow in courage and faith to follow our own path to holiness.

As we give thanks for Dorothy Day’s life – and pray for the Church’s recognition of her holiness — let us ask her to join us on our own pilgrimages. May her example of “faithful striving” inspire perseverance in all people of faith; may we take heart from her generous and courageous response to God’s call.