Dorothy Day Mass at the Cathedral
New York City’s St. Patrick’s Cathedral welcomes all to the celebration of a monthly Mass for Dorothy Day.  Second Saturday of every month, 5:30 pm; 5th Avenue (50 – 51 Streets).

Celebrate the Living Legacy of Dorothy Day with David Brooks, Anne Snyder and Paul Elie on the 40th anniversary of her death Sunday, November 29, 2020

Check out the details of the event here or watch the recording on youtube.

Dorothy Day and the Global Church:

The Person, Politics, and Passion of Dorothy Day 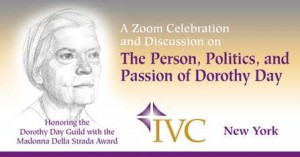 Our friends at the Jesuit Volunteer Corps held A Zoom Celebration and Discussion on the Person, Politics, and Passion of Dorothy Day. Details below, follow the link for more information and registration. https://ivcusa.org/dorothy-day/

A Zoom Celebration and Discussion on the Person, Politics, and Passion of Dorothy Day
Date: Wednesday May 19, 2021
Time: 7:00 – 8:30pm Eastern Daylight Time

WASHINGTON — If you met Dorothy Day, you were changed, said panelists at a Jan. 27 discussion following an advance screening of a new documentary, “Revolution of the Heart: The Dorothy Day Story,” which profiles the co-founder of the Catholic Worker Movement.

And if you were changed, they noted, you had the ability to make change yourself.

“Dorothy taught me to pay attention and feel the sufferings of others,” said Martha Hennessy, one of Day’s granddaughters, during the forum at Georgetown University in Washington.

Hennessy is a member of the Kings Bay Plowshares 7. They face prison terms of up to 20 years after being convicted on charges related to their faith-based nonviolent and symbolic disarming of a Trident submarine’s nuclear weapons in Georgia. She had a “curfew” of 8:30 p.m., and left following the discussion. Read the recent article about the event. 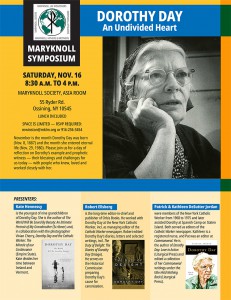 This day of reflection, sponsored by Maryknoll in November, 2019, featured these
special presentations by Kate Hennessy, Robert Ellsberg, and Patrick and Kathleen
DeSutter Jordan.

This site links to videos of all the presentations at the Dorothy Day symposium at Maryknoll.
https://mklm.org/maryknoll-symposium/

Since 1997, people from different European houses and communities have met once a year to exchange views on the Catholic Worker, often joined by Catholic Workers from the U.S. This past June, our own Jeff Korgen participated; Jeff’s official title, an acknowledged mouthful, is Coordinator of the Inquiry into the Life and Virtues of Dorothy Day. Read his fascinating reflection:

When Church movements become global, they must somehow become acculturated into the local context wherever they develop. The Catholic Worker is no exception, as a recent trip to the Euro Catholic Worker Gathering demonstrated. In June of this year, I took a relationship-building trip to Kent, England, to learn more about Dorothy’s influence “across the Pond.” About ten communities (including two farms and one café) attended from the U.K., Germany, France, The Netherlands, and Sweden.

The first thing you notice about European Catholic Worker communities is their ecumenical character. By that, I don’t mean a mix of practicing Catholics, “cultural Catholics” and “Nones,” but instead very devout Catholics and very devout Protestants—about 50/50. This mix produced some interesting reactions as I spoke to the group about progress on Dorothy’s canonization process and the importance of praying for and reporting graces and favors received. The Catholics brightened, while the Protestants, who had been with me the entire time, nodding as I spoke about the importance of having Dorothy as an example of Christian living, suddenly stopped nodding. A few shifted anxiously in their seats. The Catholic Worker may have jumped ecumenical boundaries, but praying to the saints was not going to cross any lines —at least on that day.

Nevertheless, the Catholics in the group responded warmly, agreeing to share—and translate—the prayer cards. Even those who had been previously skeptical about canonization said they had changed their minds. They seemed to embrace what many of us in the Dorothy Day Guild have come to believe—that Dorothy is not a “put-up-on-a-pedestal” saint, but one who walks closely with us on the margins, and understands and even shares many of our shortcomings.

At one point in the retreat (held at what I could best describe as a “British scout camp”), each CW house, farm, and even the French le Dorothy Café shared for about 15-20 minutes about the past year in their community. I was struck by the emphasis on serving refugees. Every single Catholic worker community in Europe is hosting refugees, feeding refugees, and helping refugees integrate into their host countries. I asked why this exclusive focus on refugees—surely there were also local people living in poverty who needed hospitality as well?

The Catholic Workers’ answers were windows into how they have acculturated Dorothy and Peter’s founding ideas. Responses fell into three categories:
1. The social welfare system in Europe is much more comprehensive than ours and actually is very effective at eliminating poverty—there are few-to-none homeless and hungry people in their communities.
2. Those who slip through the cracks of the social welfare system are typically highly addicted and very difficult to work with—beyond the scope of the skills found in the houses of hospitality (an answer I wouldn’t expect Dorothy to give, but which I nevertheless understood).
3. The demonization of refugees in Europe is so strong that focusing on refugees is a kind of prophetic witness in each of their countries.

A final observation—this was the youngest Catholic Worker gathering I have been to. Many people in their twenties were present (about half) and even a few teenagers (brought by their CW parents!). About half were seniors and middle-aged adults. It was exciting to be in that mix, as the sense I had was that they are only getting started! The Guild’s relationship to the Euro Catholic Worker community is also just beginning—we hope to grow together even as Dorothy’s cause, her message, and Catholic Worker communities spread throughout the world.

The Sheen Center for Thought and Culture and the Dorothy Day Guild were the proud co-sponsors of a special exhibition, A New World:  Contemporary Art Exploring Dorothy Day’s Vision of Social Justice. Conceived and curated by sculptor and painter, Anthony Santella (in his “spare” time he also administers the Guild’s social media), the exhibition  opened on Saturday, December 16, 2017 in the Sheen Center’s Gallery, 18 Bleecker St., in New York City.

For some coverage of the event see this interview with the curator.

A New World juxtaposes excerpts from Dorothy’s writings with artwork addressing the ideals she devoted her life to:  social justice, voluntary poverty, resistance to racial prejudice, nonviolence, Christian anarchism, and agrarian utopianism.  The work encompasses photography, painting, printmaking and sculpture.  The roster of artists includes some whose work appears in the Catholic Worker newspaper as well as homeless artists from Bolivia and New York City.  Some work is overtly political; much addresses the show’s themes more obliquely.  Yet each artist is driven to communicate a message of hope and warning as urgent in its own way as Day’s.

A centerpiece of the exhibit is a wooden shrine, built from driftwood collected on the beach of Staten Island, NYC, where Day had a cabin, demolished in 2000.  Artists and the public at large are invited to contribute small artifacts to the shrine, ex voto offerings that speak to their understanding of Day’s legacy of faith and activism.

Day’s synthesis of deep, dogmatically orthodox faith and radical social action challenges our culture’s prevalent, and increasingly problematic, liberal/conservative dichotomy.  The varied work on display should provide all viewers with some opportunity for reflection.

A Saint For Our Time
St. Thomas University in Miami, Florida, held a conference on March 7 – 8, 2014, titled Dorothy Day:  A Saint For Our Time.  Through major addresses, formal papers, and “round table discussions,” the conference explored those aspects of her life that have brought her to the threshold of sainthood.  Guild Executive Committee member Geoffrey B. Gneuhs provided us with a report from the conference.