For the first five years following her conversion, the same Catholicism that gave Dorothy Day a spiritual home also cut her off from many of her old radical friends who were working for social change.  She herself associated the Church with charity but not social change and justice.

Still she affirmed the Church’s claim to be “the tangible union between heaven and earth, between eternity and time” and “a substance to which she could attach herself.”  “I could worship, adore, praise and thank him in the company of others,” she later wrote.  “It is difficult to do that without a ritual, without a body with which to love and move, love and praise.  I found faith.  I became a member of the mystical body of Christ.”

But the divide between her religious and radical concerns left her feeling isolated and alone.  Sent by George Shuster of the Catholic magazine Commonweal to cover the Communist-inspired Hunger March of December 1932 in Washington, D.C., she wrote despairingly,

On a bright sunny day the ragged horde triumphantly with banners flying, with lettered slogans mounted on sticks, paraded three thousand strong through the tree-flanked streets of Washington.  I stood on the curb and watched them, joy and pride in the courage of this band of men and women mounting in my heart, and with a bitterness too that since I was now a Catholic, with fundamental philosophical differences, I could not be out there with them.

Kneeling afterward in the still being constructed National Shrine of the Immaculate Conception, she prayed that “I might find something to do in the social order besides reporting conditions.  I wanted to change them, not just report them….”   A pathway soon opened — not only for her but also for generations of American Catholics to come — through the seemingly unlikely person of Peter Maurin and the Catholic Worker movement they would begin. 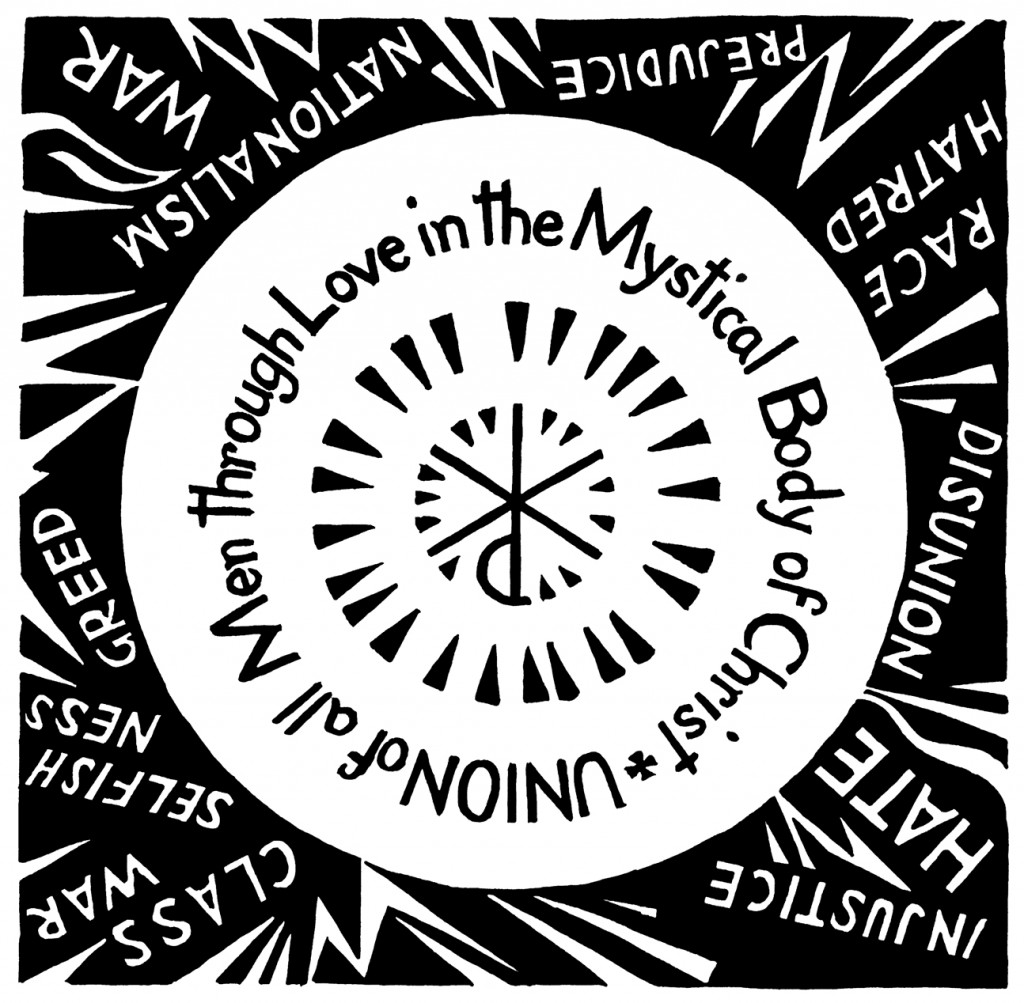 Twenty years her senior, Peter Maurin, a consummate autodidact, had led a vagabond life.  Born in France in 1877, he spent years as a teacher and then as an itinerant laborer in Canada and the United States.  Often he would spend his time in churches and libraries.  Eventually his self-proclaimed task was to make the “encyclicals click”.   He had been immersed in them for thirty years, starting as a member of Le Sillon, a French lay movement that was deeply inspired by Rerum Novarum (1891), Pope Leo XIII’s historic encyclical on capital and labor.

Maurin was sent to Day by Shuster who recognized their mutual identification with the poor.  Sitting at her kitchen table, upon her return from Washington, Maurin regaled her with his ideas — ideas he would share with anyone who would listen.  But in Dorothy Maurin found an eager pupil.  She in turn found the teacher who provided the synthesis that had so long eluded her.

Though Dorothy had received religious instruction as part of her entrance into the Church and was fully engaged in Catholic practices, through Maurin she received a much broader historic and theologically informed picture of Catholic doctrine and tradition.  He conveyed their import in succinct maxims, breaking up his sentences into didactically recitable units.  Later they would be printed in the Catholic Worker as “Easy Essays.”  Tireless and irrepressible, this self-styled troubadour sought “to create a new society within the shell of the old, with the philosophy of the new, which is not a new philosophy, but a very old philosophy, a philosophy so old that it looks like new.”

Peter believed that the Christian Gospel called urgently for three things — intellectual renewal through a workers’ publication;  houses of “hospitality” (he rejected the condescending term “charity” for performing a duty to the poor); and a return to life on the land, a “green” revolution.

The idea of publishing a paper understandably captured Day’s imagination first.   Peter wanted to call it the Catholic “Radical” (“radical” as in “root”, from the Latin “radix”), reflecting his desire to return to the roots of the Gospel.  But Day held out for the Catholic “Worker”, reflecting the church’s teaching on labor and her own roots in leftist movements resisting the abuses of capitalism.

The Catholic Worker movement was launched on May 1, 1933, in the depths of the Great Depression, with the distribution of the first issue of the newspaper.  Day and three others took the 8-page tabloid to Union Square, thronged with communists and others celebrating May Day, and sold it for a penny a copy:  the same price it is today.  It was addressed “to our readers”:

For those who are sitting on the park benches in the warm spring sunlight.  For those who are huddling in shelters trying to escape the rain.  For those who are walking the street in the all but futile search to find work.  For those who think that there is no hope for the future, no recognition of their plight, — this little paper is addressed.  It is printed to call their attention to the fact that the Catholic Church has a social program — to let them know that there are men of God who are working not only for their spiritual, but for their material welfare.

The paper articulated the movement’s goal in a statement of “aims and purposes”: “to realize in the individual and society the expressed and implied teachings of Christ.”

Maurin taught Dorothy that poverty was more than a cause for protest.  It could also be a sign of compassion and a means to perform the works of mercy, feeding, clothing and sheltering those who are, for various reasons, poor.  With much more faith than it had money (trusting to Divine Providence became a highly developed spiritual discipline for the Catholic Worker), shortly after the publication of the paper, Dorothy and Peter opened the first two “houses of hospitality” in Manhattan.  Later the first experiments on the land would begin, “agronomic universities” as Peter liked to call them.

The Catholic Worker soon involved a heady blend of prayer, study, and action.  The latter not only included the corporal but also the spiritual works of mercy which included picketing, leafleting, and helping striking workers.  Students, workers (skilled, unskilled, and the unemployed), laypersons, seminarians, Bowery “guests,” the lettered and the unlettered gathered regularly for what Peter called  “clarification” of thought.  The point was to get people to reflect on the things that really mattered:  to recover and bear witness in the modern world to the clear demands of the Gospels.

A huge, untapped reservoir of Catholic energy was released in the early years of the Worker.  Houses of hospitality sprang up in cities across the country, and the number of “staff” (unpaid volunteers who lived voluntarily poor lives) grew steadily.  In the first three years, the circulation of the paper jumped from 2,500 to 150,000. 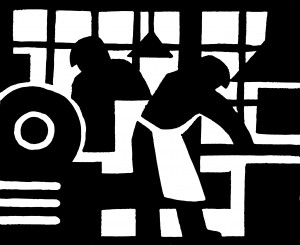 In the summer of 1936, with the start of the Spanish Civil War, the Worker confounded many of its readers and sympathizers by its refusal to support either side in the conflict.  But it was the Worker’s pacifist declaration during World War II that caused its support to plummet, even among some of its own ranks.  What many, in good faith, experienced as taking pacifism too far, was for Dorothy a natural and necessary clarification.  Under Peter’s tutelage, her identification with “the masses” had blossomed into an embrace of the full doctrine of the Mystical Body of Christ:  her “solidarity” now lay with all persons created in the image of God — and that included the poor and the enemy.

Of course, we do not talk of brothers in wartime.  We talk of the enemy, and we forget the Beatitudes and the commandment to love our enemy, do good to them that persecute us.

Add to this, Dorothy’s experience in Catholic Worker houses had led to her forging a connection between poverty and violence.  “We do not yet know what it means.  Loving our enemy.  We only fear him.  We have great possessions, like the young man in the Gospel and we turn from Christ to the use of force to protect them.”

Perhaps because their only measure for “success” was love seen as fidelity to the Gospel, particularly the Sermon the on the Mount, Dorothy and the Catholic Worker survived these troubles and the movement’s apparent decline.  In the 1950s, they opposed nuclear arms through fasts, picketing, and protests that landed Day in jail more than once.  Later, in the 1960s, when protest became almost commonplace during the civil rights movement and the Vietnam War, Dorothy’s own dissent, rooted in the discipline of prayer and sacrifice, offered a particular credibility.  New houses sprang up across the nation, and Dorothy crisscrossed the country on Greyhound buses or in rundown cars to visit them.  Today they number well over 100, including several in Australia, the United Kingdom, Canada, Germany, the Netherlands, the Republic of Ireland, Mexico, New Zealand, and Sweden.  Still, the Catholic Worker never saw itself as an “organization” but rather, as Peter described it, an “organism.”

With Dorothy’s death in 1980, many observers anticipated the movement’s demise.  Yet it continues to engage new generations, attracted inevitably by the Christian ideal of concrete love in action.  Characteristically, Dorothy would credit Peter for the movement’s longevity.   “Peter gave me more than instruction,” she liked to repeat.  “He gave me a way of life.”